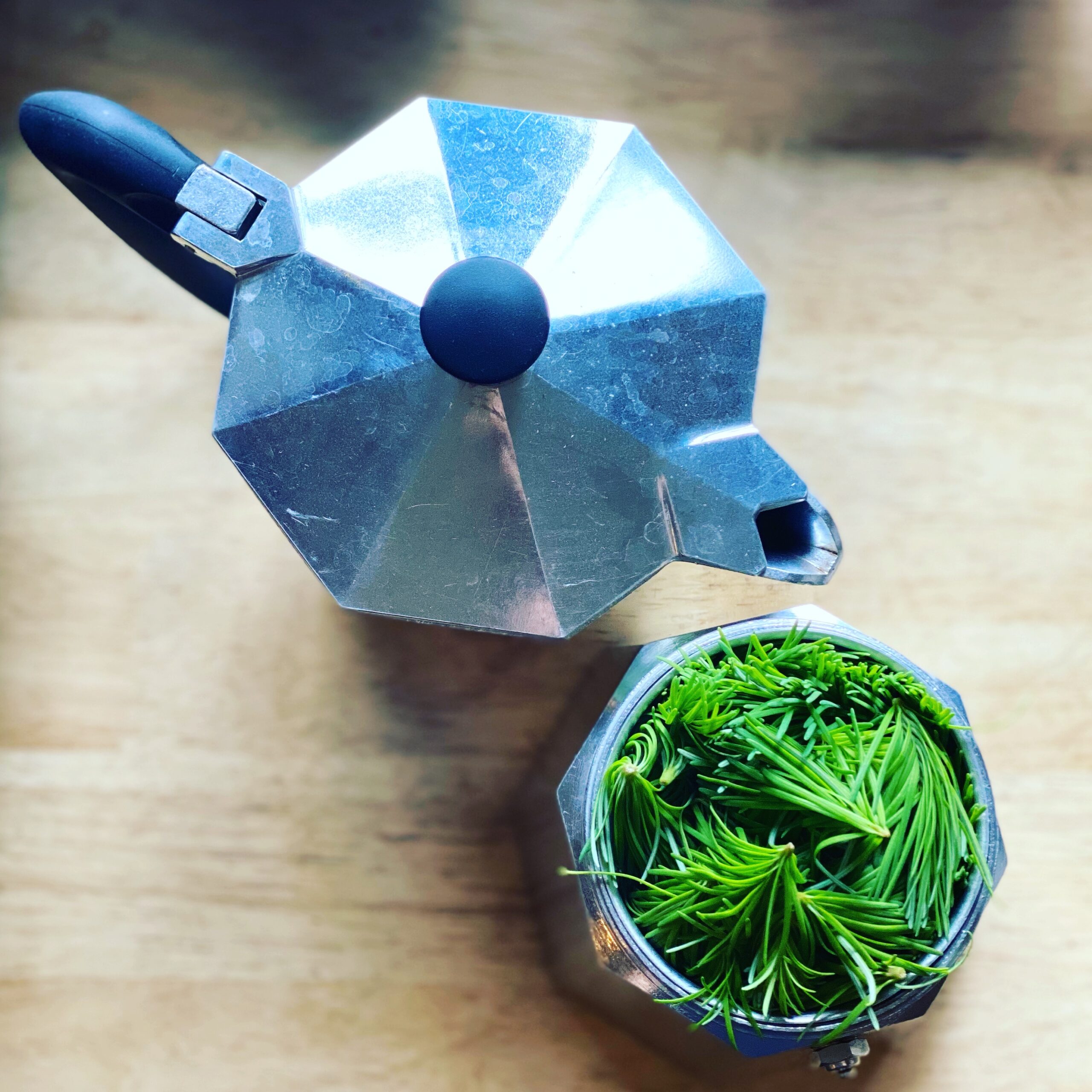 I was introduced to fir tips a few years ago as a great winter vitamin C tea regimen.  A friend and I went out with our kids and picked the fresh green fir tips in May and then she dried hers for storage while I fermented mine for eating and for making antioxidant rich hummus. I have a regular and a cauliflower keto version of it and both are super tasty.  I have served it to many and they can’t quite put their finger on the flavor of the “lemony, minty and clean” green hummus but the dish always comes home empty.

I heard about Suramin, which is a compound found in conifers and has been used to treat African Sleeping Sickness as well as Autism and is now being found to block spike protein replication. I read some ncbi summaries (the clearest one here) about it all, and with the obvious bonus of conifer tea offering wonderful immune support in our current Covid climate, the thought that something could block or suppress some of the shedding, as it’s currently being called (or transference, as it is more accurately described)* I wanted to share this jam packed C drink that everyone has in our PNW backyard. I posted this on my instagram in May, but I thought I should bring it here as I get a lot of questions about it.  Now… suramin is not the only compound that can offer immune support and block spike protein replication. Another compound called shikimic acid is found in conifer needles, dandelion flowers & stems, star anise and fennel seeds.  So far as I understand, suramin is a shikimic acid.  Any of these plant parts can be simmered similarly to produce an immune boosting, spike protein blocking tea… supposedly. I have done no lab tests on myself but was experiencing some uncomfortable symptoms until I started drinking it.  Some symptoms dissipated after a cup, like cramping and odd cycle symptoms, and some after four cups, like swelling of the thyroid.

To make fir tip tea, collect fresh fir tips and stuff them into a stovetop espresso maker as you would coffee grounds and heat until brewed. (My 9 cup size takes 16-17 minutes). Alternatively you can simmer in water for 25+ minutes and strain. I drink it straight but some like it with raw honey.  You can use the latter method for making dandelion tea, fennel tea and star anise tea…  (all of which contain different forms of shikimic acid, or if you’re feeling frisky, all three.

*To learn more read this document from Pfizer starting on page 67.

All that to say… here are the Benefits of fir tip tea, or what is more commonly consumed “pine needle tea” and tea made from other conifers: 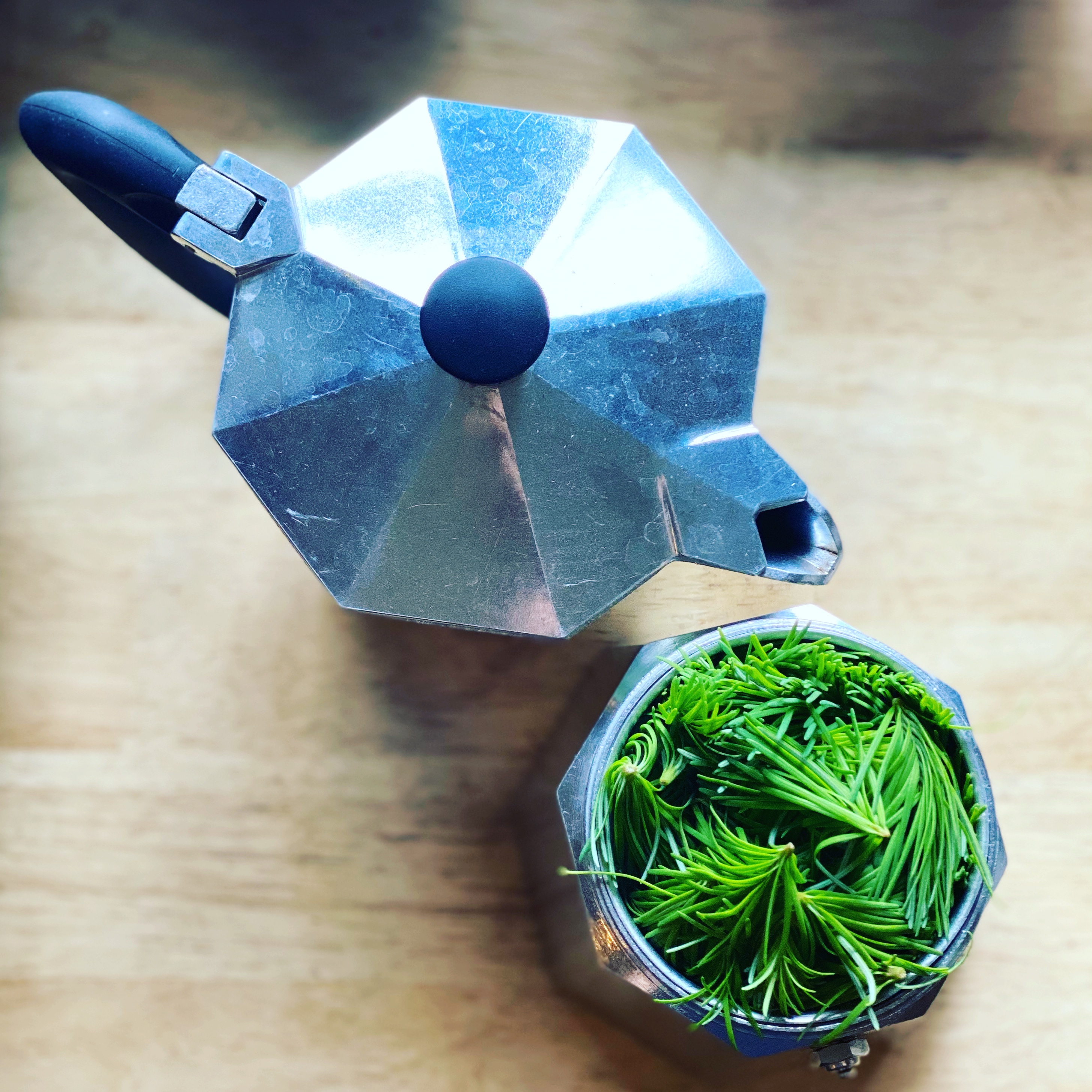 Alternatively, you can get fir tip tea from Juniper Ridge, thought I can’t attest to the potency as compared to picking it fresh.

This smoothie is dark and brooding with chocolate and black tahini and it is full of medicinal mushrooms, fermented fruits (think all the antioxidant benefits but keto) and sesame and sunflower for seed cycling in the luteal phase. I have boosted it with a powerful […] 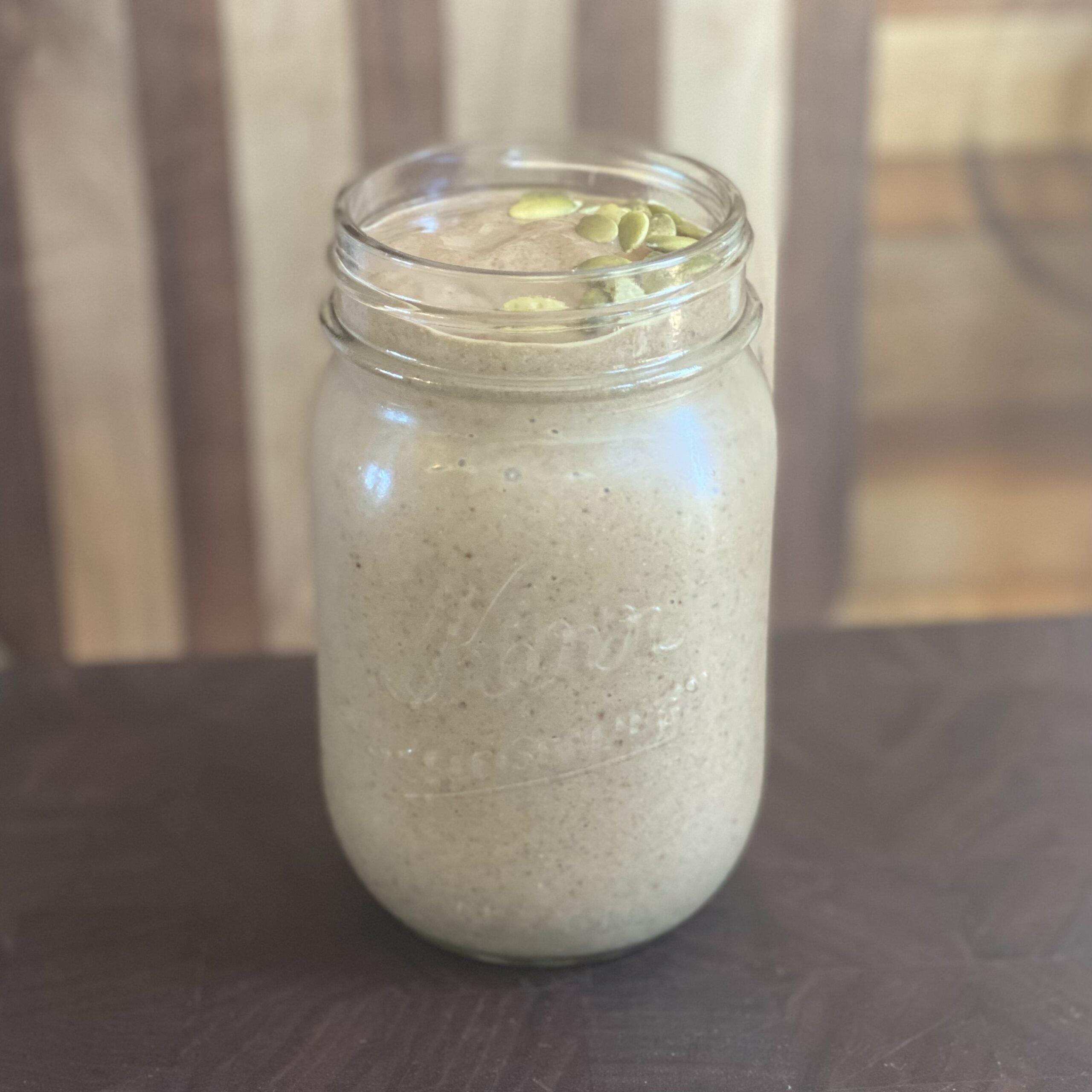 Hello!  It’s been an interesting season of figuring out my energy, weight fluctuations and what’s been behind them and frankly just balancing trying to homeschool three children with running a few businesses.  I have needed quick, simple and light lunch options to break my fast […]